Thoughts from a Cloud Native Engineer

A few weeks ago my Ergo Desktop Kangaroo Elite standing desk arrived.  I ordered several weeks before but they are either working on a bit of a backlog or are having them created when they are ordered.  When it came in I had tweeted that it arrived and at a couple of people asked what I thought about it.  Since it’s now been a few weeks with it I thought I’d share in case someone else was thinking about a standing desk setup.

This post is about my thoughts on this specific standing desk.  It’s not about standing desks in general or if that’s healthier for you, etc.  There is a ton of research out there on standing desks, so I won’t reiterate it here.  For the most part I had an interest in one for a while and even had a make shift IKEA set up at the office in my old job.  Since I know work out of the house and have get about fairly little these days I was really looking to have something that could help keep me from sitting the majority of the time.

I looked at standing desk mounts and at the Kangaroo simply because I already had a really nice wrap around desk in my home office from the last job I had where I worked from home.  I didn’t want to give up that desk, so whatever I got had to add to it.  I also wanted it very easy to go from sitting to standing using the same equipment and not have to have a separate monitor, keyboard, etc.  The promise of easy transitions from sitting to standing is really what led me to buy the Kangaroo over adjustable boom like mounts.

When I ordered I selected the free shipping with minimal assembly required.  They do have an 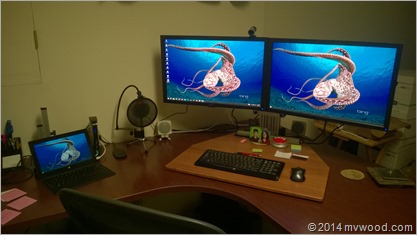 option to ship it fully assembled, but even though I’m not really all that good with hand tools I had the whole together in about half an hour.  Most of that time was unboxing and sorting through all the pieces (yeah, I’m one of those types).

Here is an image with the assembly in the seated position.  Note that keyboard platform is about an half an inch above the desktop.  Prior to ordering I had inquired as to the amount of lift on the platform and then I tried typing for a day on my keyboard after setting it on top of a half inch book, just to see if that would cause any issues.

So, without further ado: 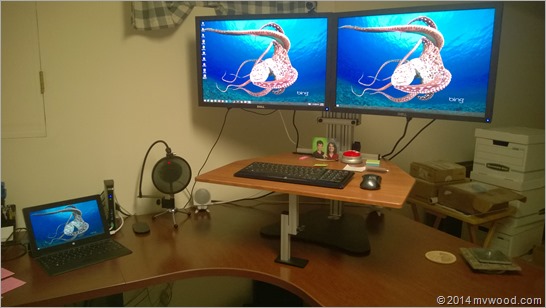 Overall I really like it.  I’m getting used to standing more, and will certainly continue to work up to standing longer and longer periods.